Stilt walkers for hire in Auckland and all New Zealand

Our stilt walkers point of difference from other stiltwalkers is; we dont just walk around, we Engage, Interact and Entertain the Audience. Since 1985 Our Stilt walkers have been entertaining New Zealand. Scroll down to see.
We also have, Clowns for Birthday Parties in Auckland Stilt Walkers Auckland , Balloon Twisting Auckland, Pre School Entertainment, Pirates Parties Auckland, STREET PERFORMERS AUCKLAND, Mall Entertainment, Events, Dunedin Clowns

Auckland's Clown stilt walker. With over 30 years experience one of the most experienced stilt walkers in NZ! Also available for Clown shows on the ground 180 for 45 minutes. 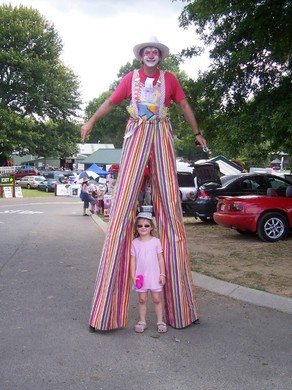 Having a stilt walker at your event really
gives it that wow factor. All are amazed at the skill.
Our stiltwalker interacts with the crowd and is only traditional Auckland clown on stilts, the kids and adults love it. Cherry interacts with the crowd; telling tall stories, making balloon animals for the kids…or has the kids (and some adults) walk through his long legs.
Cherry on stilts performs at, Parties, Rock concerts, Events and is often
employed for advertising campaigns….he has even been used in a Bollywood movie
Visual and interactive.
Phone 0274339481
Email aucklandclowns@gmail.com
We can offer different stilt walkers for different events.
Dont worry we wont hit our head on the roof...we are not that tall, we can walk on grass and we don't fall on people. Let the big show begin!
Cherry the clown also does clown shows on the ground for kids Birthday parties and events Cost 180 for 45 minutes. Magic Show, comedy show, juggling show and balloon twisted animal creations for all the kids. Cherry the clown has performed all around New Zealand, Sweden and in L.A. He has been employed as a stilt walker for the Americas cup and many major international companies who require an experienced dedicated professional.